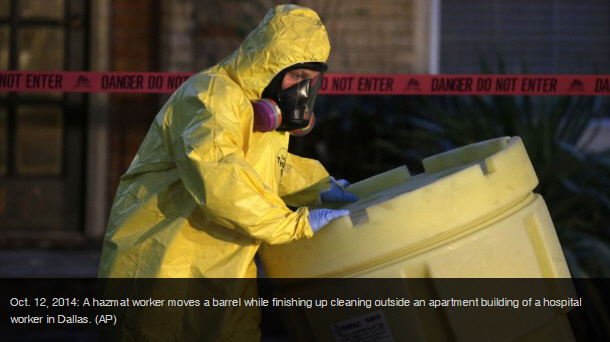 While the Obama administration and Centers for Disease Control (CDC) try to reassure the public that all U.S. hospitals are capable of treating Ebola patients, the question of what to do with Ebola-contaminated hospital waste appears to be caught up in bureaucratic and regulatory finger-pointing.

"We're asking our health care facilities to manage Ebola patients, but we have no solution on what to do with the huge amount of waste from the Ebola patients," Dr. Jeffrey Duchin, chairman of the public health committee for Infectious Diseases Society of America (IDSA) told FoxNews.com.

The hazardous waste protocols in place for hospitals require staff to place any potentially infected substances -- whether it is medical equipment or protective gear -- into special hazardous waste containers. That waste then is supposed to be turned over to licensed hazardous waste companies, where it is incinerated or chemically sterilized, according to the CDC.

That's where the already dangerous — and potentially deadly — problem gets messier.

Due to specific Ebola-related regulations issued by the U.S. Department of Transportation (DOT), which governs what medical waste companies can and cannot transport, the usual waste haulers or medical waste disposal companies are prohibited from accepting Ebola-contaminated waste until it has been properly packaged in accordance with DOT guidelines.

If a hospital is equipped with an incinerator or large sterilizer called autoclaves, the decontamination process can occur at the hospital, said Susan Lagana, associate administrator of DOT pipeline and hazardous materials safety administration.

However, few U.S. hospitals are equipped with incinerators or autoclaves needed to safely handle soiled linens, contaminated syringes and virus-spattered protective gear generated from the care of an Ebola patient.

The Ebola virus is transmitted through contact with an infected patient's blood or body fluids, such as urine, saliva, sweat, feces, vomit or semen. Ebola also can be spread through contract with objects such as needles and syringes -- but not by air, according to the CDC.

"It's not going to jump out of the bag," Duchin said, adding that the amount of time being given to find a solution is diverting medical officials away from the focus -- which should be treating the patient.

The DOT classifies Ebola as a Category A infectious agent, meaning it is capable of killing people, rather than just regulated medical waste, which includes non-lethal pathogens. But the CDC advises hospitals to treat items infected with the Ebola virus in leak-proof containers and discard them as they would other regulated medical waste.

The conflicting classifications on Ebola waste forced the Dallas hospital that treated the first patient diagnosed with the virus in the U.S. to wait for the DOT to issue a special permit before it could move the material.

"The guidance on the packaging for transport had to be adapted, and that was the issue that was addressed in the special permits," Lagana said.

Lagana pointed out the CDC and DOT regulations including categories are used for different purposes, which may lead to guidelines issued by the agencies to include additional pieces.

The permit was eventually issued, allowing Texas Health Presbyterian Hospital, which was caring for Liberian national, Thomas Eric Duncan, up until his death Wednesday, to transport and dispose of medical waste such as vomit and diarrhea generated during his stay.

"If we do have another case of Ebola in a hospital where the medical waste provider does not have a permit, hopefully they will be able to quickly get that permit. DOT has assured us that they would issue the permits quickly," said Abbigail Tumpey, CDC's associate director for communications science division of healthcare quality promotion.

Until the permit was issued, the hospital held the waste at the unit where Duncan was being held in isolation, said Dr. David Lakey, commissioner of the Texas Department of State Health Services.

Meanwhile, a Louisiana waste disposal facility, Chemical Waste Management Inc.-Lake Charles, says it will not accept the ashes generated when Duncan's belongings were incinerated, at least not until state officials agree that it would pose no threat to the public.

The company said in news release Monday that it is permitted to accept such material and that it poses no threat to the environment or human health.

But, the company says, "we do not want to make an already complicated situation, more complicated."

Louisiana Attorney General Buddy Caldwell said he plans to go to court to block the transport of the waste to the Calcasieu Parish facility.

Frieden said during a news conference Monday that the virus is not considered to be hardy in the environment and that incineration and chemical treatment of the infected waste is sufficient to remove any risk.

"We certainly know how to inactivate and destroy the Ebola virus," Frieden said. "We feel very comfortable with incineration," he said.

Reuters and The Associated Press contributed to this report